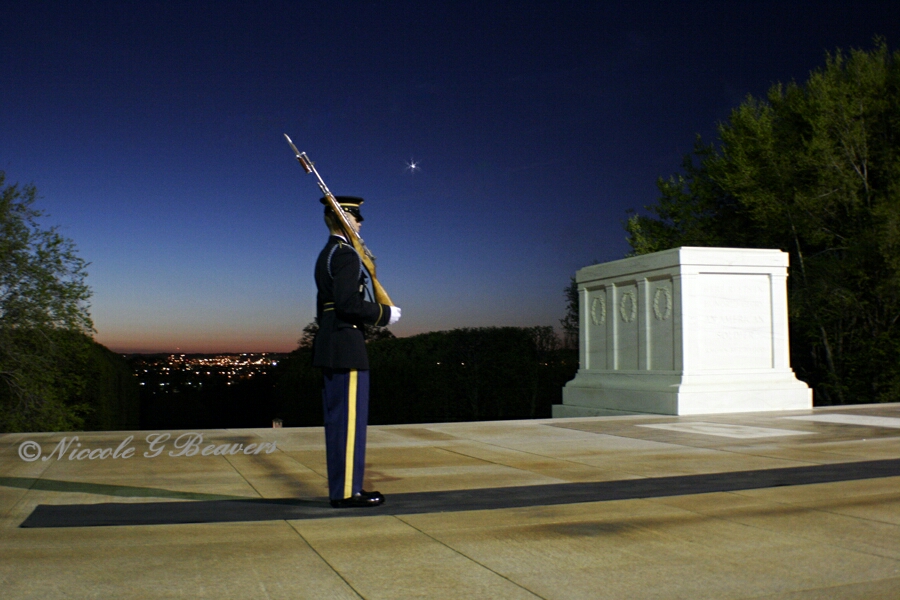 Psalms 116:15 “Precious in the sight of the LORD is the death of his saints.”

Today, in the United States of America, it is a national holiday known as Memorial Day. Businesses, banks, and government offices are closed in remembrance of those fallen in our nation’s wars. Many gather for parades that will display our heritage, our patriotism, and our pride for those who gave the ultimate sacrifice for the freedoms we hold in our country today.

Many families are brought closer to their grief on this day. Some will visit the gravesite of a family member fallen in battle. Communities around the nation will have special gatherings for some form of honor and remembrance.

There is a monument in our national cemetery at Arlington, Virginia known as the Tomb of the Unknown Soldier. It contains the remains of one soldier’s remains from each war: WWI, WWII, Korean, and Vietnam war. These men were buried as unidentified soldiers fallen in battle. One was chosen to be interred at Arlington to represent those men who gave the ultimate sacrifice.

There is an inscription on the sarcophagus that reads:

Our government has set a guard over that tomb twenty-four hours a day, seven days a week. Come rain or shine, extreme heat or snow, the guard continues its watch over their remains. An elite guard is set over the tomb. It is truly a fitting memorial for all soldiers who gave their lives in defense of our country.

But, I am reminded today of One who outshines them all. One whose ultimate sacrifice changed the way we mark time. It fulfilled the Mosaic law and gave us direct access to the throne room of Heaven in prayer. It allowed us to be saved from the punishment and penalty of sin and be seen in the eyes of the Father as righteous and holy.

As I meditated on these today, I realized again, the inevitability of death. Many of us who are more ‘chronologically gifted’, have been the witness to someone close to us who have died. Whether a neighbor, a close relative, a church member or a friend; death has been thrust to the forefront of our mind.

I lost my mother in 2001. She was only 62 years old. Her death was a shock to us all. It came on the heels of a particular sickness that literally overtook her. During my time of grief, God gave me the text verse named above.

Precious. How could you say the word precious and death in the same sentence without seeming macabre? To me, I could not wrap my mind around ‘death’ as being ‘precious’.

At least not until God asked me; “Look again… who is it precious to…?”

“Precious in the sight of the Lord is the death of his saints.”

Death to us is loss. Death to God is gain.

We lose the presence of their soul here on earth with us.

The Father gains the presence of that soul of that saint in Heaven with Him.

Biblically, saints are not some person canonized for their life work and recognized as godly. They are those who have placed their faith in the finished work of Jesus Christ. Jesus’ death, burial, and resurrection totally satisfied God’s need for justice for our sin and in its place, we received the righteousness of His Son.

By the grace of God, I am now viewed as holy, as righteous, as a child of the Almighty. It is a place I do not and will never deserve. I receive it freely, just as it was offered.

So, today, on a day of remembrance, I will remember those in my country who gave their lives for me to have the freedoms we enjoy.

But more importantly, I will remember the free gift and the price that was paid to purchase it. I am kept by His promise until the day of redemption when I will be free of this earthly body and rise up to be with my Father – forever.