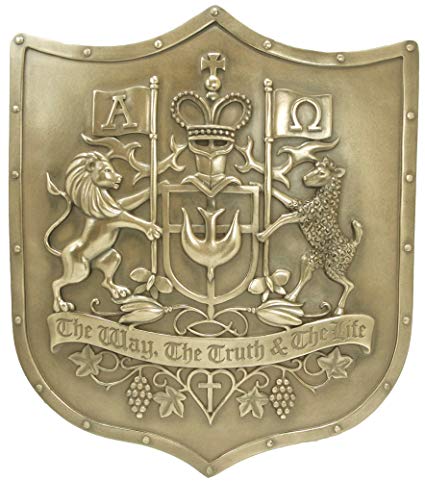 Isaiah 54:17 “No weapon that is formed against thee shall prosper; and every tongue that shall rise against thee in judgment thou shalt condemn. This is the heritage of the servants of the LORD, and their righteousness is of me, saith the LORD.”

There are some whose heritage is represented by a coat of arms. Others by a family tree that touches royalty. Some have relatives they’d soon forget and others that would make headlines. We all have a past and some of us have more than a few skeletons in our closet.

Thanks be to God that today! As a saved child of God, I now have a sanctified past; forgiven and forgotten. I can live in the light of His presence and look forward to the reality of seeing my Heavenly Father face to face!

When a person puts their faith in Jesus Christ to save them, a transaction takes place that changes their life completely.

2 Corinthians 5:17 “Therefore if any man be in Christ, he is a new creature: old things are passed away; behold, all things are become new.”

Adoption papers are signed and we become members of the greatest royal family known to man throughout eternity, the universe and beyond.

We are not illegitimate children, but sons and daughters of the King of Kings. We are joint heirs with His son Jesus Christ.

Romans 8:16-17 “The Spirit itself beareth witness with our spirit, that we are the children of God: And if children, then heirs; heirs of God, and joint-heirs with Christ; if so be that we suffer with him, that we may be also glorified together.”

That mustard seed of faith we planted and placed in Jesus Christ, has grown into far more than we could have ever expected. We now have promises given to us by the very fact of who we are in Jesus Christ. We have priviledge and promise beyond our imagination.

I can remember the first time I read the text verse for today; my heart melted in awe of who my Father made me to be to Him. I inherited a heritage that has rights and priviledges for me to freely utilize in my life.

“No weapon that is formed against thee…”

Our enemy is moving to create more weapons of mass destruction. STDs, AIDS/HIV, heroin, crack cocaine, fentanyl, suicide, alcohol, cigarettes… the list grows daily. Our flesh is bombarded with all sorts of ‘candy’ for us to try. He covers the deadly consequence with a thin veneer of pleasure.

God knew we would be tempted with all sorts, types and kinds of sin. While He has the power to remove the temptation, He instead, allowed us to become as soldiers to war against the factions that fight against Him.

The ultimate battle is first and foremost in my mind. If I can win there, I will be able to win the war. Lose, and I will be in bondage to whatever I yield to in my flesh.

Think of it. Our enemy, Lucifer, was the highest ranking angel before he fell. He was given responsibility over the throne of God. He was the music director, the worship leader, if you will, of Heaven. And when he fell, even the other archangels could not defeat Him.

Jude 9 “Yet Michael the archangel, when contending with the devil he disputed about the body of Moses, durst not bring against him a railing accusation, but said, The Lord rebuke thee.”

In Christ, we have power. It is God who will rebuke our enemy. He shields us, protects us, guides us, empowers us, and provides for our every need.

We suffer accusation here on this earth. Here, in America, the acceptance of Christianity is growing from tolerance to intolerance and there are more than just a few instances that prove we are soon to be persecuted for who we are and what we stand for.

The devil would love nothing more than to eradicate any traces of God from the face of the earth and set up his kingdom.

But, I know too, that we will survive. There has always been a remnant that has survived. The United States of America was founded on Christian principles. Her framers assumed that morality and decency were accepted behavior among her people.

Now, with the acceptance of every form of wickedness, we are being told that right is wrong and wrong is right and we are accused of extreme hatred when we declare what God says is an abomination.

We see churches falling away from the truth of the Word of God; adding to the scriptures; accepting any wicked lifestyle. Believing the lies of the devil and perverting the gospel of Jesus Christ.

Romans 1:24-25 “Wherefore God also gave them up to uncleanness through the lusts of their own hearts, to dishonour their own bodies between themselves: Who changed the truth of God into a lie, and worshipped and served the creature more than the Creator, who is blessed for ever. Amen.”

In this day and age we live in, we can take comfort in the knowledge that God said this would happen and because we are His children, we can live victorious no matter what is going on in the world.

Take heart child of God! His armory is fully stocked. He has given us armor to withstand in the evil day. He has weapons far more powerful than any our enemy possesses.

Drive all doubt and fear away.

Place them at the feet of Jesus and rest in His promise that you and I who are saved have a heritage far greater than anything this old world has to offer!