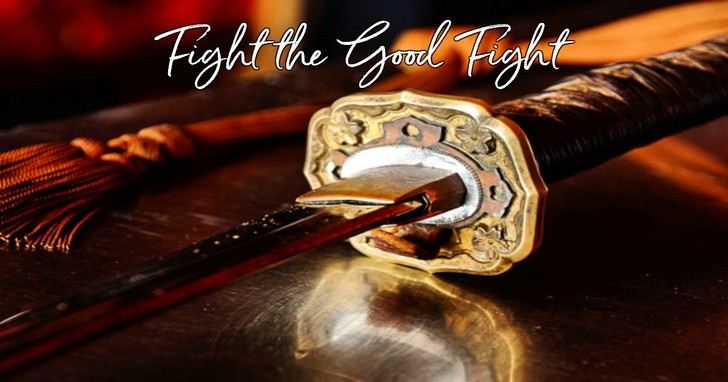 2 Timothy 2:22 “Flee also youthful lusts: but follow righteousness, faith, charity, peace, with them that call on the Lord out of a pure heart.”

1 Timothy 6:12 “Fight the good fight of faith, lay hold on eternal life, whereunto thou art also called, and hast professed a good profession before many witnesses.”

When I read this passage in Timothy, I remembered the admonishment Paul gave to young Timothy to fight the good fight in previous chapters. There is a fight today, for good and evil. If God’s children do not take up the good fight, darkness will ensue.

In the Book of Proverbs, we read:

Proverbs 7:9 “In the twilight, in the evening, in the black and dark night:”

Twilight is when darkness and light are equal. The evening is when there is more darkness than light. The black and dark night is the absence of light. As long as God’s children are here on this earth, there is light.

Satan knows that his time is short and is waging an all-out war on our faith. This war is not on those who are lost without the Lord.

It is a frontal assault on God’s children.

Our personal walk with God is under attack.

Our homes are under attack.

Every one of our relationships is being assaulted.

It may not seem readily visible, but we cannot see God working in our world today.

Frank Peretti wrote “This Present Darkness,” a fictional telling of a college town under spiritual attack. His writing style brings the reader into the reality of this world and then opens the door to the spiritual realm.

When I had read it, the book opened my thought process regarding the warfare being waged on the angelic front. It reminded me of the archangel Michael’s battle and the demonic prince that hindered the messenger from God to his servant Daniel.

Daniel 10:12-13 “Then said he unto me, Fear not, Daniel: for from the first day that thou didst set thine heart to understand, and to chasten thyself before thy God, thy words were heard, and I am come for thy words. But the prince of the kingdom of Persia withstood me one and twenty days: but, lo, Michael, one of the chief princes, came to help me; and I remained there with the kings of Persia.”

So, when we are given the options presented to Timothy, we must use discernment as to what course of action to follow.

Flee youthful lusts. I take that to mean that I must have all my functions in subjection.

1 Corinthians 9:26-27 “I therefore so run, not as uncertainly; so fight I, not as one that beateth the air: But I keep under my body, and bring it into subjection: lest that by any means, when I have preached to others, I myself should be a castaway.”

Joseph was tempted by Potiphar’s wife but refused.

Genesis 39:8-9 “But he refused, and said unto his master’s wife, Behold, my master wotteth not what is with me in the house, and he hath committed all that he hath to my hand; There is none greater in this house than I; neither hath he kept back any thing from me but thee, because thou art his wife: how then can I do this great wickedness, and sin against God?”

There was a slogan in the 1960s; “If it feels good, do it.” That is the exact opposite of what every child of God should do.

Follow after righteousness. What not to do is followed by instruction of what to do.

Fight the good fight tells me that there are good fights and wrong fights.

The good fight of faith is that which will honor the One for which I am fighting. A lousy fight reflects poorly both on me and the One for whom I fight. Some battles I need to run from.

Some cite these verses as a direct contradiction in scripture, but the better part of wisdom teaches differently. I was introduced to view these verses in this manner:

When wrestling with a skunk, whether you win or lose, you come away smelling bad.

“Never argue with a fool. They will drag you down to their level and beat you with experience.”

A fight might be to challenge someone who takes God’s name in vain in your presence.

It may be to protect one who cannot defend themselves.

It may be a fight against the wickedness that threatens your home or loved ones. It is not to arm ourselves to the hilt and go down in a blaze of glory.

The only act of violence committed by the Lord Jesus Christ was to turn over the moneychangers’ tables in the temple. It was in defense of the temple’s original purpose – to be a house of prayer.

Today, let the choices you face be filtered by God’s Word and guided by His Spirit.