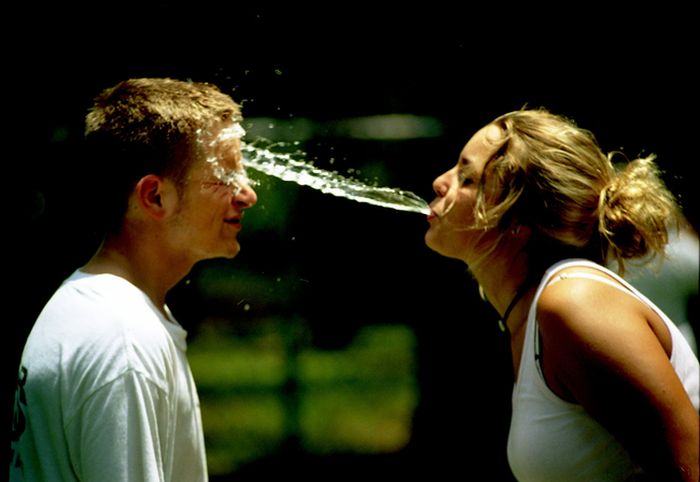 Mark 7:33-34 “And he took him aside from the multitude, and put his fingers into his ears, and he spit, and touched his tongue; And looking up to heaven, he sighed, and saith unto him, Ephphatha, that is, Be opened.”

Have you ever had anyone spit at you?

It is a form of contempt, derision, and mocks the one spat upon in today’s culture. In some cultures, it is done to ward off curses. But generally, it is done as a form of anger, hatred, and disgust for the person.

So, when we read that Jesus, the Son of God, used spit in the mouth of one to open their tongue to speak, we may think it gross or crude. Yet, it was the very agent that gave him the ability to speak.

Mark 8:23 “And he took the blind man by the hand, and led him out of the town; and when he had spit on his eyes, and put his hands upon him, he asked him if he saw ought.”

Later, Jesus spits right on the eyes of a blind man to cause him to see.

John 9:6-7 “When he had thus spoken, he spat on the ground, and made clay of the spittle, and he anointed the eyes of the blind man with the clay, And said unto him, Go, wash in the pool of Siloam, (which is by interpretation, Sent.) He went his way therefore, and washed, and came seeing.”

In John, we see that he used spit to make clay that was applied to his eyes. When the blind man went and washed, he was able to see.

When we look into the Word of God and see things that go against our nature or take us out of our comfort zone, we shy away or balk at what we are commanded to do.

The prophet Elisha told Naaman, the host of Syria’s captain, that he was to go wash in the Jordan river seven times to cure him of his leprosy. Naaman balked at the request because the river was muddy and silt-ridden.

Naaman was angered that such a humbling act was put to him. He stormed off in anger, but his servants urged him.

2 Kings 5:13 “And his servants came near, and spake unto him, and said, My father, if the prophet had bid thee do some great thing, wouldest thou not have done it? how much rather then, when he saith to thee, Wash, and be clean?”

Nicodemus did not understand the direction Christ gave to him. “Born again” meant going back to his mother’s womb. Jesus taught him (and us) that when we trust His death, burial, and resurrection by faith, our spirit comes alive within us to be born.

Our spirit died when Adam sinned in the garden. It becomes reborn when God makes it alive again in Christ.

So many of God’s children are accused of being ignorant, simple, unlearned, and blind followers of a God the world cannot see. Faith never works with those demanding to see evidence before they trust.

But if they lack the evidence that comes through the transformation in a child of God, then shame on us!

Trusting by faith means we may not understand just why we are doing what God commands, but in doing so, we can show a lost and dying world that God is in us and works through us.

They may mock and make fun of us; some may even be so inclined to spit on us. If and when it happens, we will be in good company.

Matthew 26:66-67 “What think ye? They answered and said, He is guilty of death. Then did they spit in his face, and buffeted him; and others smote him with the palms of their hands,“

The method God chooses to bring about His will in our lives is varied and peculiar at times. Trusting that all will work out for good, we must trust our Father knows best. We cannot be stopped because we will get dirty or humble ourselves to complete the task.

Sometimes there were such unusual requests that to do so meant humiliation.

Whatever the case, our spirits must be ready to comply with whatever the task. The vehicle God chooses for us to travel is holy. Understanding that the way up is down, we can accept the humbling knowing the more excellent good He wishes to accomplish through us.

Today, you may be asked to do something so out of your comfort zone. But if you know God is leading, you can trust He will be glorified in the end.